Oak Orchard Tackle & Lodge is located at 1764 Oak Orchard Road (Route 98) just north of Albion, New York (scroll down for map). The shop is centrally located to the best western New York Great Lakes tributaries including the Oak Orchard River, Johnson Creek, Sandy Creek, Eighteen Mile Creek (Burt), Marsh Creek, Niagara River, and Genesee River. Other unnamed tribs draw trout and salmon too. Only the Niagara and Genesee Rivers require an hour drive or so, while all the tributaries are an easy, short drive from the shop and lodge. Because of the diversity of tribs to fish, there is almost always some productive water during the fall, winter or spring.

The best salmon fishing in the upstream gravel reaches usually gets underway near the end of September  -peaking through October and sometimes lasts into November. Cohos can extend the run even further. Angling for Brown Trout peaks at the end of October and through November, even lasting through December. With consistent flows, some browns even winter over in the tributaries. Steelhead, Rainbows and Atlantic Salmon can be caught throughout the Fall season and are an extra special thrill during this warm water season.

If you’re too excited to wait for the action in October, then come cast and retrieve a spoon, plug or fly in the lower Oak Orchard River sections and the rivermouth. Arm jarring strikes will be your reward. These are the freshest salmon of all and can be caught by the beginning of September and sometimes the end of August. 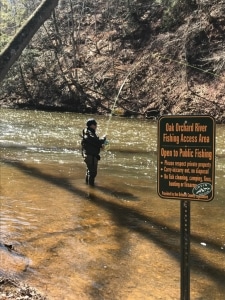 Fishing the Oak in Spring

Steelhead, one of the most sought after gamefish, is the prized quarry during cold-water periods. They will leave you wondering how any fish could battle so hard in cold water, and will readily take a well presented fly drifted through likely holes and runs.

Some Steelhead linger in the tributaries from Fall migrations, but they generally enter the tributaries on high water periods from November through April. Peak runs are usually January, February, or March with spawning occurring in March and April. Savvy anglers contact the shop or check this website to keep tabs on weather and flow conditions (click here) for successful Steelhead fishing.

For anglers who just can’t give up on the trout action come April, the larger tribs can contain steelhead right through May. Runoff conditions will often dictate your success. And to extend your big trout fix even longer, there is great Lake Ontario shoreline action beginning about late March and through May. Casting spoons, plugs and flies will yield strikes from brown trout especially, and even some steelhead, coho salmon & smallmouth bass.

The WNY area and Oak Orchard River is known as one of the country’s premier trophy trout fishing regions and is an extraordinary hotspot. Point Breeze, on the Oak Orchard River was named the Ultimate Fishing Town in 2013 by the World Fishing Network!

This site uses cookies. By continuing to browse the site, you are agreeing to our use of cookies.

We may request cookies to be set on your device. We use cookies to let us know when you visit our websites, how you interact with us, to enrich your user experience, and to customize your relationship with our website.

Click on the different category headings to find out more. You can also change some of your preferences. Note that blocking some types of cookies may impact your experience on our websites and the services we are able to offer.

These cookies are strictly necessary to provide you with services available through our website and to use some of its features.

Because these cookies are strictly necessary to deliver the website, refusing them will have impact how our site functions. You always can block or delete cookies by changing your browser settings and force blocking all cookies on this website. But this will always prompt you to accept/refuse cookies when revisiting our site.

We fully respect if you want to refuse cookies but to avoid asking you again and again kindly allow us to store a cookie for that. You are free to opt out any time or opt in for other cookies to get a better experience. If you refuse cookies we will remove all set cookies in our domain.

We provide you with a list of stored cookies on your computer in our domain so you can check what we stored. Due to security reasons we are not able to show or modify cookies from other domains. You can check these in your browser security settings.

These cookies collect information that is used either in aggregate form to help us understand how our website is being used or how effective our marketing campaigns are, or to help us customize our website and application for you in order to enhance your experience.

If you do not want that we track your visit to our site you can disable tracking in your browser here:

We also use different external services like Google Webfonts, Google Maps, and external Video providers. Since these providers may collect personal data like your IP address we allow you to block them here. Please be aware that this might heavily reduce the functionality and appearance of our site. Changes will take effect once you reload the page.

The following cookies are also needed - You can choose if you want to allow them: